“Why Social Distancing Feels So Strange

Humans are wired through millions of years of evolution to be social creatures. Faced with the COVID-19 virus, can we stay connected at a distance?

George M. Leader is a visiting assistant professor of anthropology at The College of New Jersey. 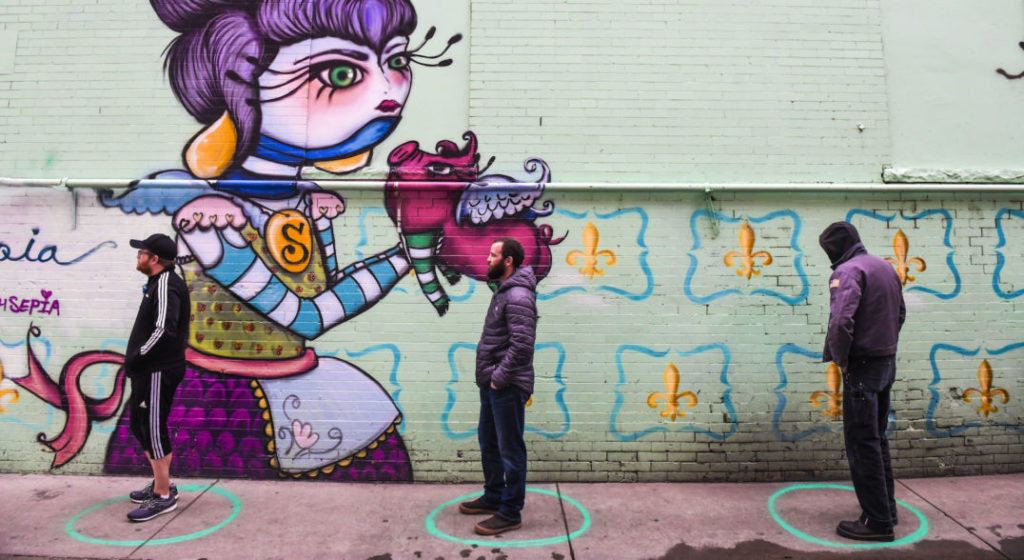 Why does intentionally avoiding physical interaction with other humans during our daily routine feel so strange? The answer may lie in millions of years of behavioral and cultural evolution.

Since our evolutionary split from chimpanzees around 7 million years ago, humans have become increasingly dependent on complex social cooperation to survive and thrive. People sometimes think of humans as fundamentally selfish or violent, but anthropological research shows that we have evolved to work cooperatively and live in supportive communities.

Some of the earliest evidence for the importance of cooperative behavior in our species comes from a surprising event: the evolution of walking on two legs. Among the earliest evidence of bipedalism in the hominid linage is Sahelanthropus tchadensis, an upright ape-like primate from Chad dating to about 7 million years ago.

There are plenty of possible reasons for why our ancestors began to stand upright: It might have helped them regulate their body temperature, decrease their exposure to natural radiation from the sun, or increase their range of sight to watch for predators, among other reasons. But one hypothesis proposed by American biological anthropologist C. Owen Lovejoy in 1981 suggests that our ancestors freed up their hands for food sharing, specifically so that a male could carry food back to a female raising their young. This type of social cooperation is much more difficult for quadruped knuckle-walkers like chimpanzees.

By about 1.9 million years ago, around the time of the appearance of Homo erectus, cooperative behavior may have greatly increased again. By this time, females were facing significant challenges giving birth: Their upright bodies had a hard time delivering big-brained babies. This physical burden might have prompted dramatic shifts in hominin social structures, with a bigger division of labor between males and females, and additional collaboration between childrearing females.

Along with this change in society seems to have come stronger social supports within these communities. Physical evidence for this can be found in the femur of an 800,000-year-old H. erectus from Java. The femur was badly broken—an injury that almost certainly means a quick death for someone trying to live alone. But, incredibly, this fracture healed. That means the injured hominin received an enormous amount of support from their social group. Our ancestors really took care of one another.

As a result of humanity’s evolution for social tendencies, we have a problem: loneliness. This feeling may act as a driver to pull people back together, much as thirst makes people drink and hunger makes people eat. But it has negative consequences too.

People who perceive themselves as being without social support, living in a world without beneficial social interaction, can become irritable and depressed. Lonely people—and animals—tend to adopt more selfish behaviors, putting their own needs first. The more a human thinks there is a lack of beneficial social interaction around them—in other words, the lonelier they feel—the more they adopt these behaviors.

The consequences of isolation and the ensuing selfish behaviors can be high. Persistent loneliness can reduce our capacity to look after ourselves and even harm our physical health. According to one 2018 study, loneliness in people is associated with a 26 percent increase in the chance of premature death.

But can we entirely override our long-programmed interactive cooperation and replace it with distant cooperation? Will virtual interaction be a suitable replacement in fulfilling the need for physical interaction? It remains to be seen.”